“Even if none of my du’as are answered, the blessing of hope is generous enough.” 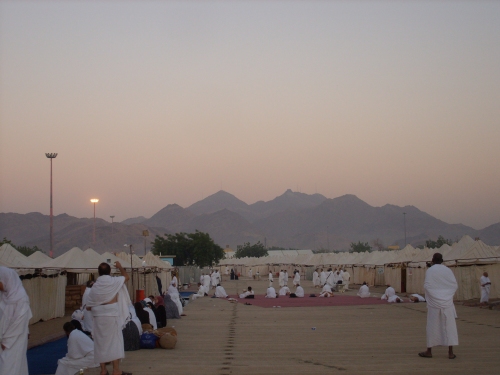 From 1pm until Maghrib (5:45pm), I did my best to continuously make du’a. For like, 2 ½ hours, I went non-stop, Alhamdulillah – making sure to stand in the sun for as long as I was making du’a. I walked out of our camp, wandered about a mile away, trying to find a secluded area to make du’a, but didn’t have much luck. I ended up standing on the side of one of the streets, where at least no one from my group would see me, so I could be more engulfed in my supplications without any distractions or judgments. Even then, people were continuously walking past and would stop and try talking to me, I guess seeing me standing there with my eyes closed and hands raised wasn’t enough of a sign. I’m finding it’s surprisingly difficult to find the solitude I’ve been yearning for while here.

There were some nice little interactions though. One guy saw me and gave me a bottle of water. Later, a woman walked up to me, carrying 3 cases of water and juice on her head. She was out of breath, speaking to me in Arabic. I froze, not knowing what she wanted, but luckily another man came and helped her get the cases off of her head. Ahh…oops… :/. She rested for a few minutes, then when she went to put the cases back on her head, I helped her prop them back up. She smiled and said, “Thank you”, in English, and walked off. Another guy walked up and stood like 5 or 6 paces away from me and stared at me while I was making du’a. I just ignored him, closed my eyes and kept going. After a little bit, I hear him talking really loud, I look and see him on his cell phone. There was space all around us…but he chose to stand right in front of me and have his conversation. Thankfully, he didn’t stick around long.

I went through my entire 6 page du’a list. Each name. Before I left for this trip, I emailed the majority of my contacts and asked them to send me any du’as they had. I copied and pasted them all into one document and just printed that out, along with the names of everyone that hadn’t sent me anything, so I could still remember to make du’a for them. Going through it, I would read each name, close my eyes, think of the person and try to ask from my heart for whatever good I wanted for them. I would get tired and want to stop, but trudged through, out of the love I have for these wonderful people, mA.

I’m pretty beat right now, even though I ain’t do nuffin else all day. I heard that it was best to be in the sun when making du’a on the Day of Arafah, to feel that heat and intensity, and to remember the Day of Judgment and the Hereafter. Standing out in the sun for that long was especially exhausting, but at least I got a little Arafah tan afterwards :P.

It was a huge blessing to be able to witness this day, Alhamdulillah. Even if none of my du’as are answered, the blessing of hope is generous enough. Allah owes us nothing, but Him giving us the opportunity to ask for whatever we want is truly Majestic. My Lord is Most Bountiful, Allahu Akbar. 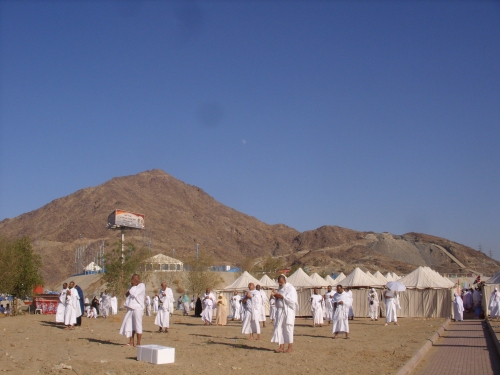 Pilgrims Plead For Their Salvation At Arafah

We’re currently in Muzdalifah, it’s about 9:15pm. You’re supposed to delay Maghrib on the Day of Arafah until you get to Muzdalifah. I’m not sure how long you’re allowed to delay it for though, I feel like we waited way too long. Our bus took a while to show up at Arafah, so we didn’t get to Muzdalifah until like 9pm. I’m about to straight knock out though in a few minutes. We’re basically on a parking lot on the side of a street. It legit feels like a highway rest stop, with millions of people all around and buses constantly roaring past. There’s actually alot of pollution here, it’s not the open-air, fresh weather I was expecting when I first heard about Muzdalifah.

I’m gonna slam in my earplugs and drop on this eye shade and get me some good sleep iA. Tomorrow is Eid, it’s also going to be our longest day. We have to stone the Shaitan after Fajr, then wait for our qurbani’s, then we get to shave our heads- woop woop! We can change out of our ihrams too, but we still have to do one more tawaf and sa’iy in the Haram before we’re all clear. That’s alot for one day, but then we’re pretty much chillin. The last 2 days after that are much simpler, just stoning both days.

That’s all for now. Just pray my du’as are accepted. They’re good ones, I promise ;).