“These rocks have bore witness to the beginning of revelation and to the opening of something superbly magnificent.”

This entry is being written from inside the Cave of Hira. SubhanAllah, it’s a zoo, even up here. This is no place of retreat. I found a little nook in some shade right above the cave’s passageway, still inside, but above everyone. There’s such a nice, cool breeze blowing. It’s like 20 degrees cooler in here, even at 12:30pm, it’s comfortable. It’s got to be at least 90 degrees outside otherwise. My feet touched the mountain at 10:50am. It took an hour to reach the top, so many people, still so much trash. We have left nothing sacred. Everyone going up was either Desi, Afghan, Turkish, or Russian – lots of those mountain folk. There’s also no rocks left inside the cave. I thought I’d be slick and grab a few to give to people, pieces of the cave of Hira. I found a few in the entranceway, those will suffice, people jacked the rest.

I could totally chill up here for hours, especially since I’m out of the way. I can see how the Prophet would meditate here. If there were no one around, this place would be truly serene.

The view is sick too, you can see all around in every direction. You can’t really see the Ka’aba, but you can see the Haram, especially the minaret and towers. If there was less clutter, and smog, you could probably see better. 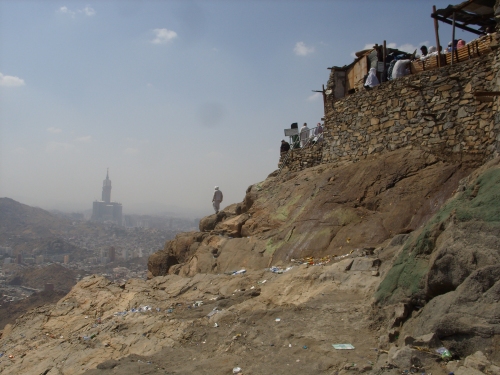 Mecca in the Distance

Who knows which part of the cave he would actually sit in, where he would face, where his blessed hands had touched. For once though, I’ve finally come to a place preserved from the Prophet’s life. These are original walls, these rocks have bore witness to the beginning of revelation and to the opening of something superbly magnificent.

This place has become a full-blown tourist spot though. You think, ok, I’m going to climb a mountain, this is going to be somewhat spiritual and enlightening. Instead, along the way, there are jammed routes of people, tea and juice stands, beggars, and chinese tasbih and kufi salesmen. Everyone and their mom is on their cell phone, climbing up. Seriously? 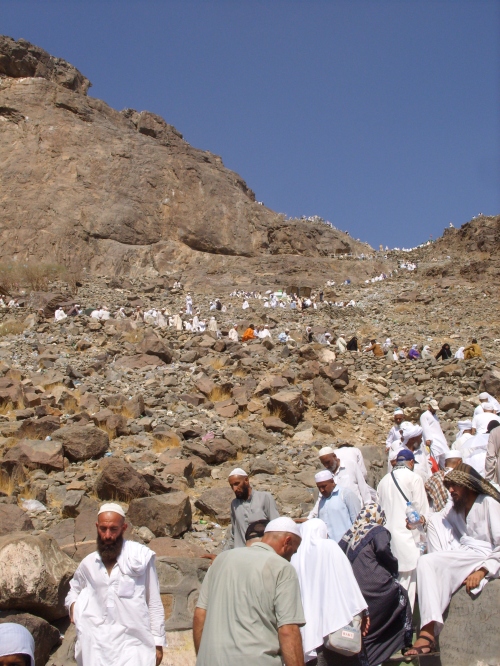 You know I even had a dude standing next to me at the Ka’aba, with his hand on the wall, during tawaf, calling someone! He was Desi and spoke in Urdu, so I understood. He was like, “Ah, yeah, ok, I’m here at the Ka’aba, any du’a you want me to make??” I’m like dude…smh.

Ok, I’ve been here for about half an hour, it’s still every bit as crazy. I’m going to pray Dhuhr on top of the mountain iA, that’ll be dope. Maybe, I’ll drop by the Haram afterwards iA.

The cave has graffiti all over. The mountain itself is completely defaced. Graffiti everywhere, people tagging their names, garbage all over the sides of the slopes. 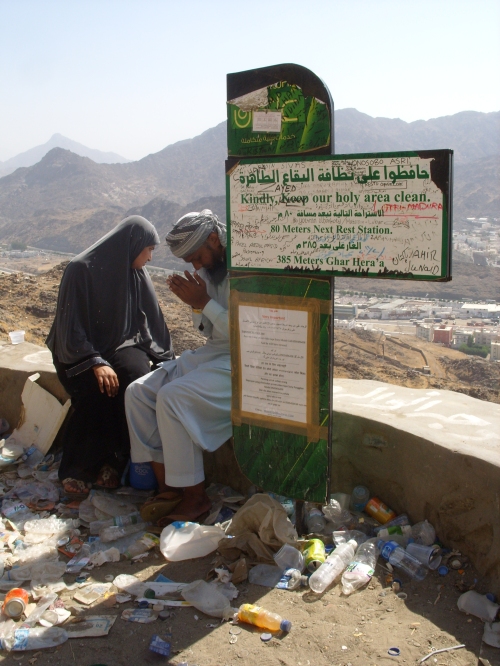 The cave itself is just a passageway that goes through a covered area in a series of stacked boulders, to the Southern face of the mountain top. I think I’m actually technically on top of the cave of Hira, but it’s still covered by a canopy. I’m gonna just peek my head into the cave in a few minutes, then head back iA.

There’s no pollution up here at least, finally some clean air – just sand and dust. The cave itself is littered with empty water bottles and crushed juice boxes, subhanAllah. I still can’t get over that. People push, shove and fight each other to get up the mountain and into the cave but they don’t even give these places basic respect and dignity. Allah save us. Guide our hearts. Help me to benefit from my journey to this place and to these Holy Lands. Ameen. 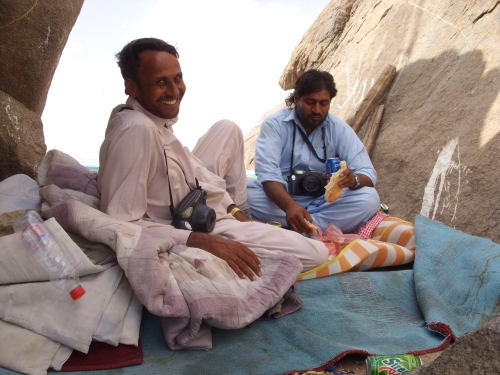 Close to 2pm. I’m still on top of the mountain, away from the crowd finally, sitting out front, near the edge of the mountaintop. There is sakina finally. I didn’t actually step foot in the proper cave area – not really concerned actually. It’s all about the retreat and I’ve found that. Takes some time for it to settle in, but it’s here. I just prayed Dhuhr on top of Jabal An-Nur, right on top of Hira, subhanAllah. Everything around looks so small and more calm, finally. You can still hear some car horns, smh. Other than that, Mecca and its surrounding towns are put into perspective. The mountains are so much more prominent in the landscape now. The entire area is covered with mountain ranges – great big enormous fixtures. No wonder Allah makes reference to mountains so much in the Qur’an – they’re very much a part of everyday life here, for the ancients at least. 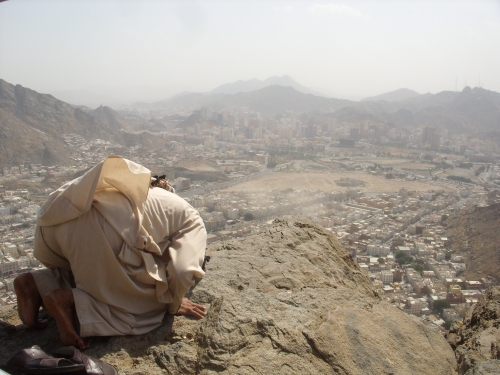 Praying on the Edge

There’s so much peace in climbing to the top of the mountain, facing the Qibla, and making salah. There’s a hadith about the excellence of this act at a time when the world will be so chaotic, such a retreat would better benefit man. Totally get it. Time to go iA, 2:05pm.

The cave of Hira is located at the top of Jab Al-Nur, The Enlightened Mountain. It is located a few miles outside of downtown Mecca. Before receiving revelation, it was the habit of the Prophet, peace be upon him, to retreat to this cave for long periods of time. He would prepare food and supplies for many days and go to the cave to meditate and ponder on the nature of this life and our existence in this world.

It was in this cave, at age 40, that the Prophet first received revelation. The Angel Jibril entered the cave and spoke to the Prophet, startling him, commanding him to “Read!” The Prophet, who was illiterate, responded to this mysterious voice that he was unable to read. The Angel squeezed him, nearly to the point of death, and released him, commanding again, “Read!” The Prophet again said he was not able to read, and was squeezed by the angel. After a third time, the Angel began to recite the beginning of revelation to the Prophet, “Read! In the Name of your Lord! Who created man from a single clot of blood. He taught by the pen, taught men what they did not know”